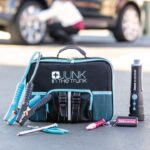 U.S. Based Premier Personal Protection Products (Ship to 50 States where applicable)
Our mission is to equip, empower and educate women to protect themselves and their families.
Personal protection products for families, automobiles and homes.
– Stun Devices
– Pepper Spray
– Security On The Go
– Concealed Carry Purses
– RFID Protection
– SAFE Hearts Family Education
– Digital Defense
– Monthly Specials
– Apparel
– Protect & Fortify Wellness
As we protect ourselves, families and communities we equip ourselves with personal safety and situational awareness.

Founded in 2011 by Link Toi Massey, a Physicist & Nuclear Engineer, whose mission it is to embrace the uninitiated and change the face of technology forever. The JEKL Foundation for STEAM Education has reached over 3000 youth through individual and partnership programming, expanding as far as Guinea, West Africa. Its signature STEAM IN A BOX! interactive science kits have been distributed to across the world and most recently a featured holiday donor opportunity through a collaborative partnership between the National Black Child Development Institute, The City & Country of Denver, and The Church of Latter Day Saints; 242 patrons purchased a total of 964 STEAM IN A BOX KITS!

JEKL programs are culturally competent and pedagogically tailorable and include such titles as GENIUS WORKSHOPS; THINK LIKE A GIRL! STEAM mentoring programming for girls; Scalable Video Game Design courses: CODE LIKE A KING!; CODE LIKE A GIRL!; CODE LIKE A BOSS!; MATH MADNESS; FROM BACKPACKS TO BRIEFCASE; TECH the TEACHER; DOC SHOPS: MAKER WORKSHOPS FOR GENIUSES.

The JEKL Foundation’s FROM BACKPACKS TO BRIEFCASE program has supported Denver (CO) Chapter’s mentoring program “Links To The Future”, including STEAM IN A BOX!, as well as Circle City (IN) Links Chapter who has partnered with Link Toi and the JEKL Foundation to support its Real World Real Girl Conference to deliver the Keynote as well as 100 STEAM IN A BOX! interactive science kits.

Please note: This is a platform for our members to exchange their information. We are not endorsing any businesses in this directory. Please do your own due diligence on the companies/businesses listed. Feel free to ask a Link member for any information (i.e. references, etc.) before using their business just as you would do in the normal course of doing business with any other entity.

The Links, Incorporated will not accept responsibility for any dissatisfaction with services you may receive from a Link-owned business listed in the directory.